Raw vs JPEG: Are you a shoot-and-share photographer?

Or, are you a shoot-edit-share photographer?

If you edit your pictures, read on to learn why you should be shooting with Raw files. 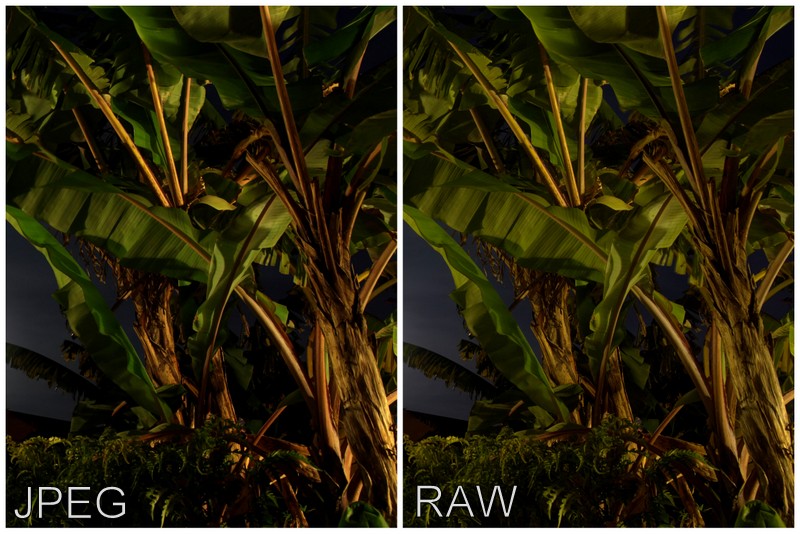 Having a hard time telling the difference between the two photos? That's because of your computer screen. When compressed down for the web, Raw and JPEG files can look a lot a like. The difference really shows up when the photo is printed or blown up to a larger size.

JPEGs do make life simple.  All the world should be a JPEG.  They are so easy to move around and manipulate.  Websites and hard drives have no problems showing, finding or looking at JPEG files.  Yay JPEGs! You are great.  And in time, JPEGs may rival Raw files.

As great as JPEGs are, below are 5 reasons why you should shoot with Raw files.

Raw vs JPEG: Why Choose Raw?

Raw files provide way more 1's and 0's than JPEG files.  All of this extra information in your picture file allows for incredible editing performance.

2. Raw Files Can Cover Your Mistakes

If you are off with your exposure settings, Raw files will let you find information that JPEG files will miss.

Above: In this cropped picture you can see that the edited Raw file kept the detail behind the green plant. The edited JPEG was not able to retrieve that information. Both JPEG and Raw files were simply auto-exposed in Picasa.

NOTE: I can only show you the original JPEG because the original Raw file is not web friendly. Score one for the JPEG.

What Raw files do is allow you to correct any white balance or exposure errors in editing. It all goes back to the fact that Raw files contain more information in the image file. With a Raw file you are able to make subtle or dramatic changes to your image in ways that JPEGs are not capable of doing.

Clients buying photos for their ad campaigns or for their website or magazines want only the best images to represent their brands. Shooting in Raw with stock photo agencies in mind will help attract a different client that has different needs. And a different budget.

When shooting commercially or for a client, you should have a workflow that allows for Raw files to be served. Adobe Photoshop Lightroom is one of the most popular photo editing and organizing programs for Raw files.

Some professional photographers shoot in JPEG because they are confident enough in setting their exposure or their turn-around time demands that JPEGs be used.

I shot a bike ride across the U.S. for an entire summer using only JPEGs because I had to give my client, The Fuller Center for Housing, hundreds of photos every day. By shooting in JPEG, I was able to immediately upload the day's pictures to their website. Had I been shooting Raw, I would have had to convert all of the files to JPEG first, then upload them to their website. I did not have enough time to do that extra step.

There was a time when camera buffering was an issue. Camera buffering is just like the buffering you experience waiting for a Netflix movie to load. Sometimes the tubes that make up the internet aren’t big enough to handle all of the data flowing through them. So, little 1’s and 0’s wait in line to go through the tubes and load the movie or picture.

Because raw files are so big, older digital cameras would take longer getting those files through the camera's tubes. Today’s cameras are much faster and will only get faster.

I shoot mostly documentary-style and have to get “that moment” that cannot be repeated. With my Canon 60D, I can shoot in Raw without my camera tubes getting all clogged. With some of my older cameras, this was not the case with Raw files.

In a time long ago, storage space was an issue for digital photography.  Now, a cheap 15MP SD card can hold almost 2,000 JPEGs and around 500 or 600 Raw files.  Buying a terabyte of external hard drive space is less than $100.  A terabyte of space for under $100!  That's a lot of pictures.

Just as cameras are getting faster and faster, storage space is getting bigger and cheaper.  Now, there is no real reason to worry that Raw picture files are going to overwhelm your storage solutions.

In the end, raw files are better than JPEGs when it comes to image quality.   But that image quality comes with some extra work.  In order to share yoour Raw files, you will have to convert (compress) them. And, it may not even be noticed in pictures on the web.

JPEGs make for great images.  Don't let anybody tell you otherwise. But with JPEGs, you need to nail your exposure. Look at the example above one more time. I underexposed that shot. Luckily, I was shooting in Raw and JPEG at the time. The Raw file can be salvaged. The JPEG cannot.

When you want to present the best possible image you can, shoot and edit Raw files.  Their much larger file sizes ultimately result in better images.

When Should You Shoot JPEG?

If you are not going to edit your pictures or don't have time to convert them, shoot JPEG. But get your exposure right.