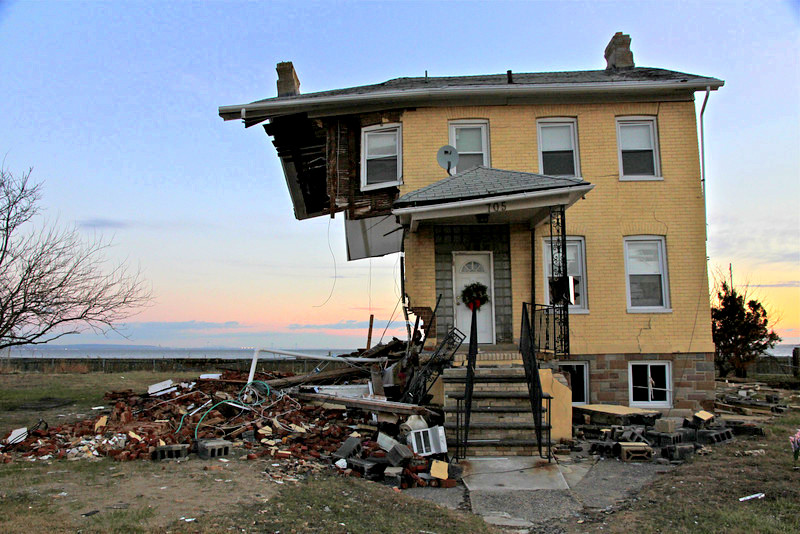 Hurricane Sandy (Superstorm Sandy) of 2012 is the second costliest hurricane in U.S. history. It affected states all along the Atlantic seaboard from Florida to Maine. And left in its wake more than 10 million people without power in the United States and is attributed to nearly 150 deaths in the countries that lay in its path.

Hurricane Sandy's storm surge made landfall with New York City on October 29, 2012. Estimates rate the total damage in the United States to be over $65 billion, surpassed only by Hurricane Katrina.

Only two months after Hurricane Sandy made landfall, Habitat for Humanity launched and sent its first-ever Mobile Response Units to New York and New Jersey to begin the rebuilding process.

Consisting of an initial fleet of 24 fully equipped vans loaded with construction materials, volunteers left Habitat for Humanity's headquarters in Atlanta, GA and made their way up the East Coast to Union Beach, New Jersey and Staten Island, New York to assist families affected by Hurricane Sandy.

I worked at Habitat for Humanity for over 10 years helping to raise funds, manage communications and photograph and film Habitat's life-changing work around the world. I've never been at a loss of amazement at how effective Habitat's work is on communities and on the people that come in contact with Habitat.

Obviously, those who receive Habitat homes have their lives altered in ways that I can really only imagine. But beyond the homes, Habitat volunteers often experience life-changing experiences as well as they work side by side with those in need. 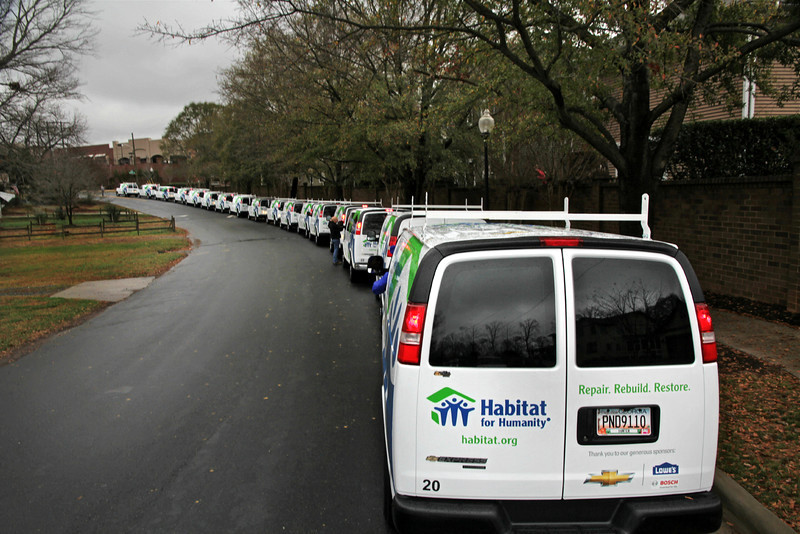 Above: Habitat for Humanity's Mobile Response Unit vans line up outside of a Lowe's parking lot in Charlotte, N.C waiting to be filled with building materials to be taken to New York and New Jersey to assist in the rebuilding efforts there are Hurricane Sandy devastated that area just two months before.

Habitat for Humanity's response to Hurricane Sandy was no exception. As our team of volunteers spent two days in a convoy of vans rolling up the Eastern coast of the United States there was a sense of determination and excitement: two mental states that Habitat volunteers know very well.

Determination and excitement are the two words that best describe Habitat for Humanity. Whether it is a "typical" Saturday build or a rapid response to a disaster, there is always a sense of determination on everyone's mind (and heart). Volunteers arrive on site and are briefed on what will be accomplished that day and soon after everyone works in tandem to meet that goal and exceed it if at all possible.

Excitement is an unusual word when you think of charity or social service. But Habitat for Humanity's approach to helping those in need creates excitement for everyone involved. From corporate sponsors, to political leaders, to future homeowners to first-time volunteers and experienced volunteers, there is always a game-day attitude on a Habitat build site.

Determination and excitement is amplified after a disaster. Whether responding to earthquakes, floods, tsunamis or tornadoes the sense of purpose a community has is often channeled through Habitat for Humanity.

Building began as our team of volunteers made the long journey to help with the recovery efforts after Hurricane Sandy. The excitement of helping and the determination of completing projects had several days to build as the team of 24 Habitat vans made their way to New York and New Jersey. 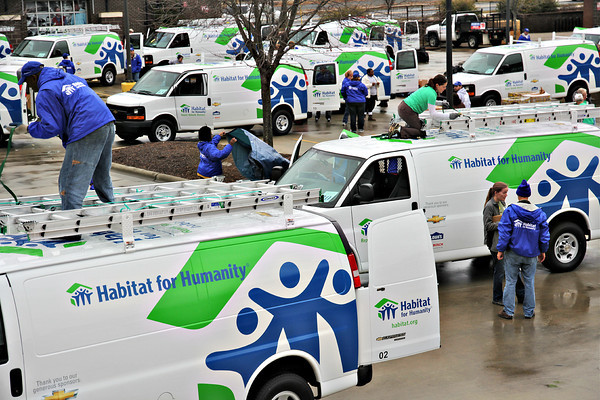 Above: Habitat for Humanity volunteers load building supplies into (and onto) vans to be driven to New York and New Jersey to help rebuild lives and homes in the aftermath of Hurricane Sandy.

Years after Hurricane Sandy destroyed so many lives, long after the news cameras have gone, Habitat for Humanity remains as determined as ever to rebuild the lives of those affected by Hurricane Sandy. The excitement that is created every time a homeowner is presented with a new home is just as powerful now as it was in the immediate aftermath of the storm.

NBC's Today Show cast and crew became Habitat volunteers as they joined in on the efforts to begin rebuilding the home of Carlos and Dawn Rodriguez in Union Beach, New Jersey. The Rodriguez's home suffered significant damage and flooding when Hurricane Sandy made landfall. The series of pictures below document that day. 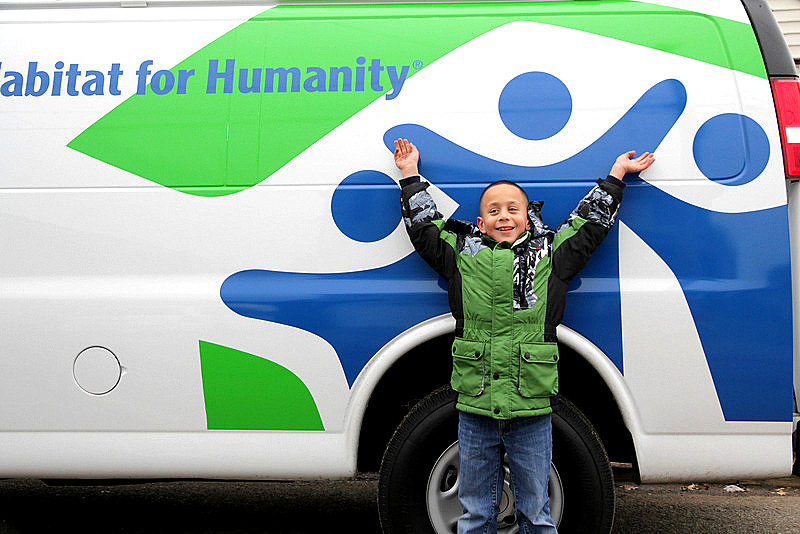 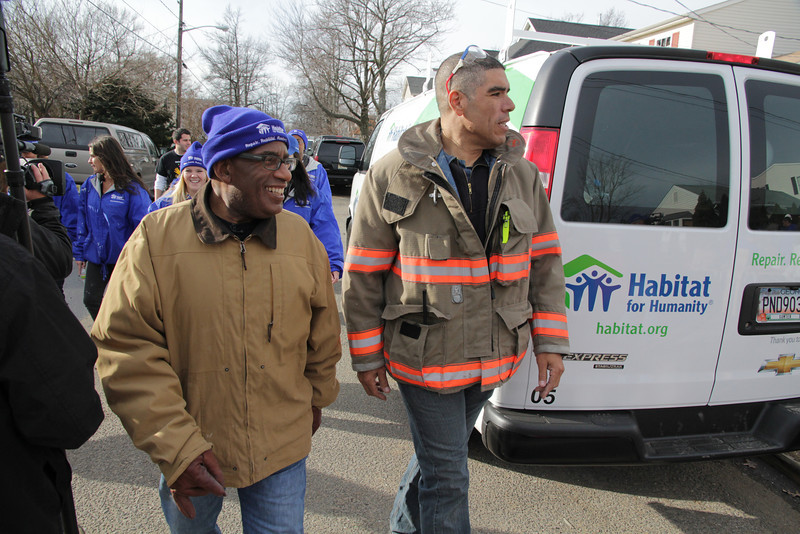 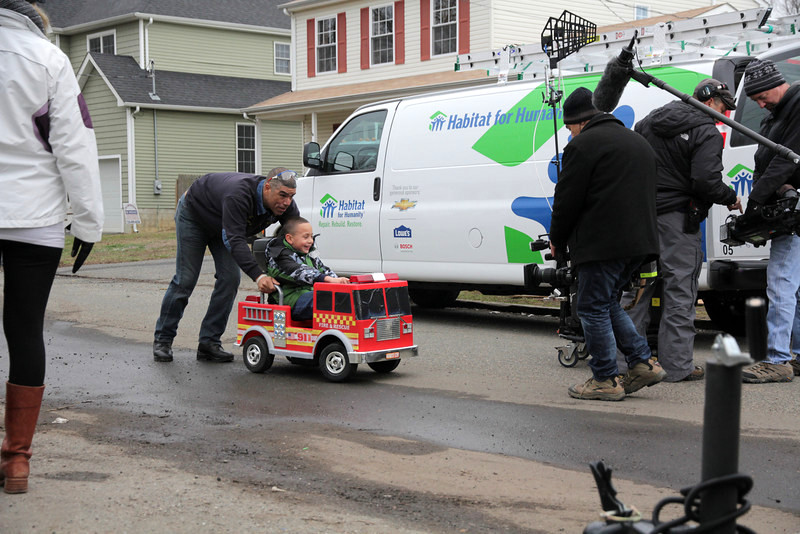 Above: EMS Chief Carlos Rodriguez and his son Jonathan take a break from the building efforts on their home as the crew from the Today Show captures the action. 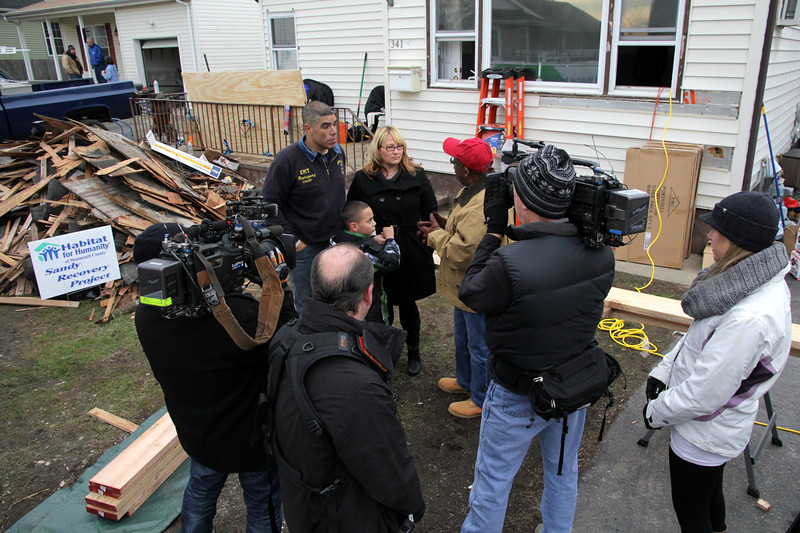 Above: Al Roker interviews EMS Chief Carlos Rodriguez and his wife Dawn with son Jonathan at their side for NBC's Today Show. 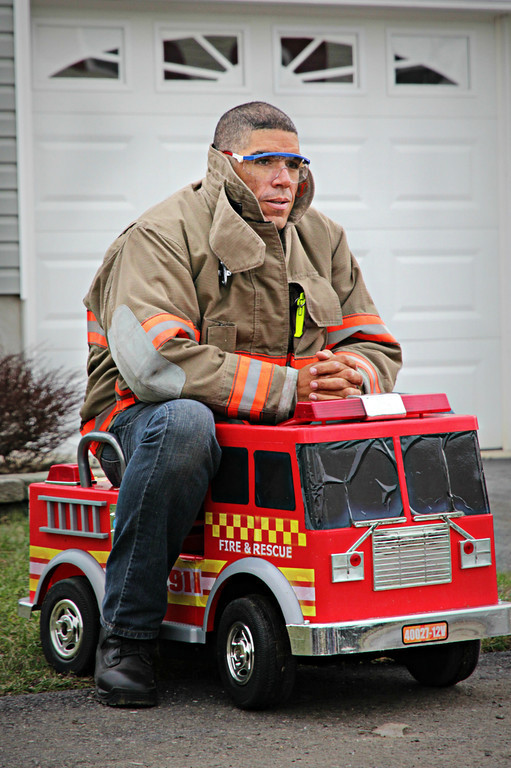 Above: EMS Chief Carlos Rodriguez looks on as Habitat for Humanity volunteers rip out the floor of his flooded home in Union Beach, New Jersey. 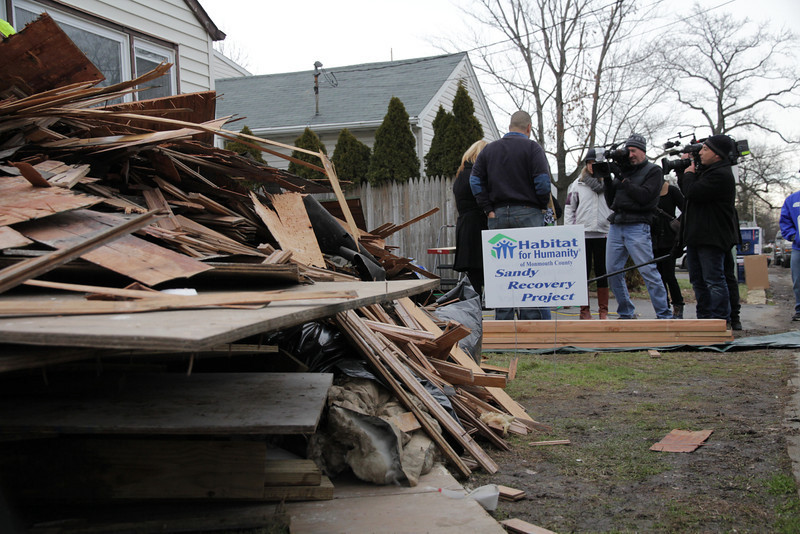 Above: The Rodriguez family of Union Beach, New Jersey are interviewed by Al Roker and NBC's Today Show team outside of their home. 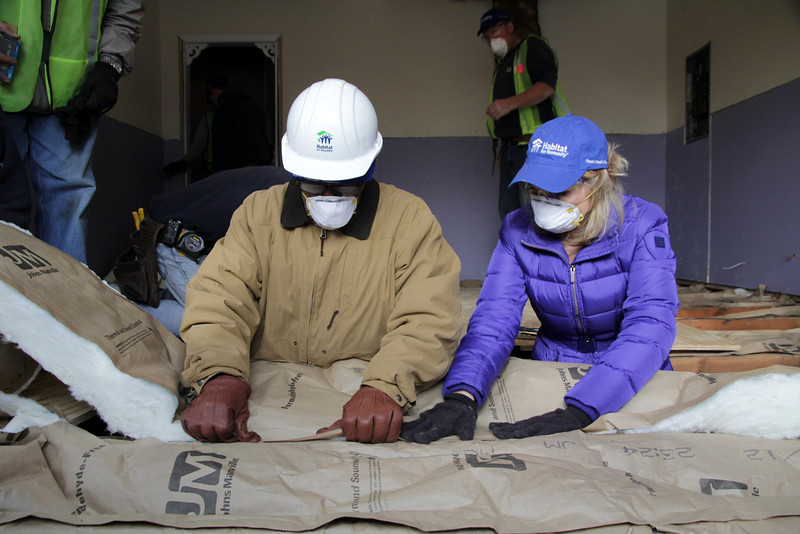 Above: Habitat volunteers Al Roker and Andrea Canning (from NBC) place new insulation in the floor boards of EMS Chief Carlos Rodriguez's home after it was damaged by flooding caused by Hurricane Sandy. 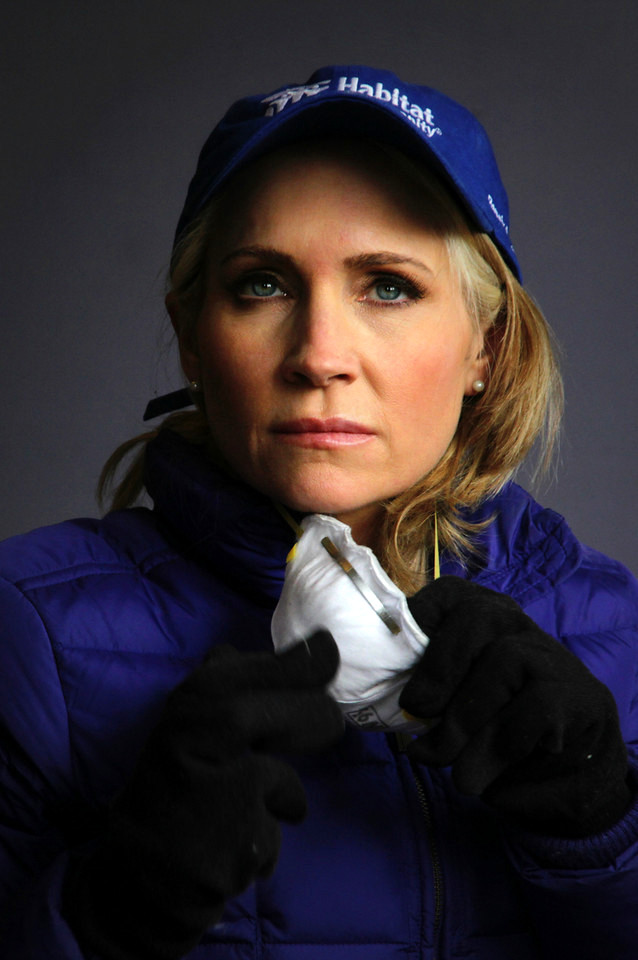 Above: Habitat volunteer and NBC News correspondent Andrea Canning has a quite moment as she helps to lay insulation in the floor boards of the Rodriguez family of Union Beach, New Jersey after it suffered damage from Hurricane Sandy just two months before. 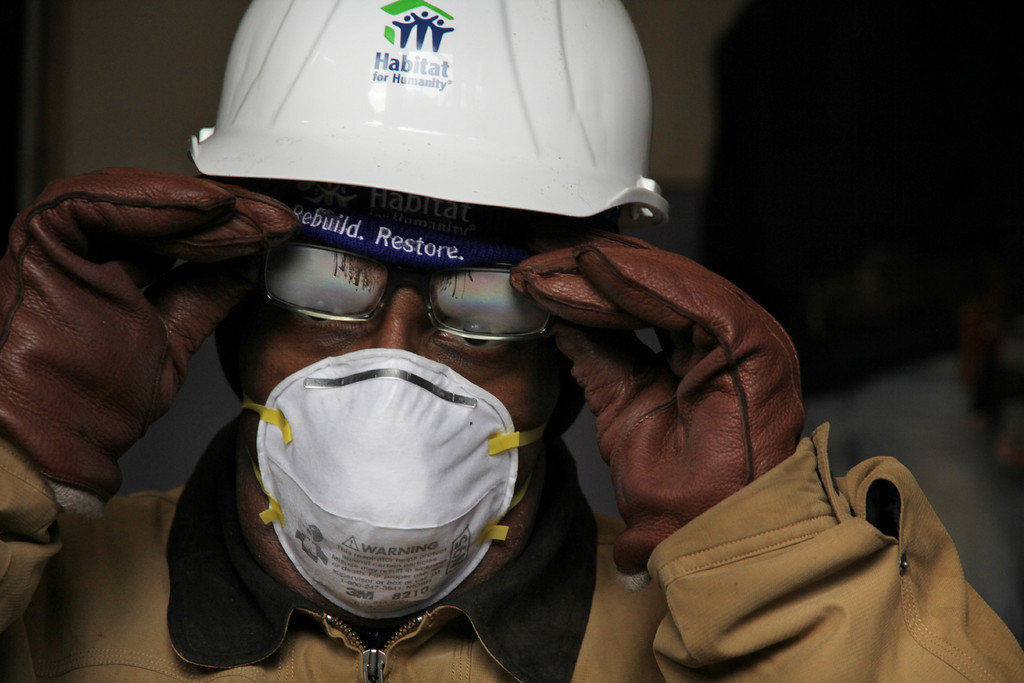 Above: Habitat for Humanity volunteer and Today Show host Al Roker prepares to install insulation in the floor boards of the Rodriguez family home that was flooded during Hurricane Sandy. 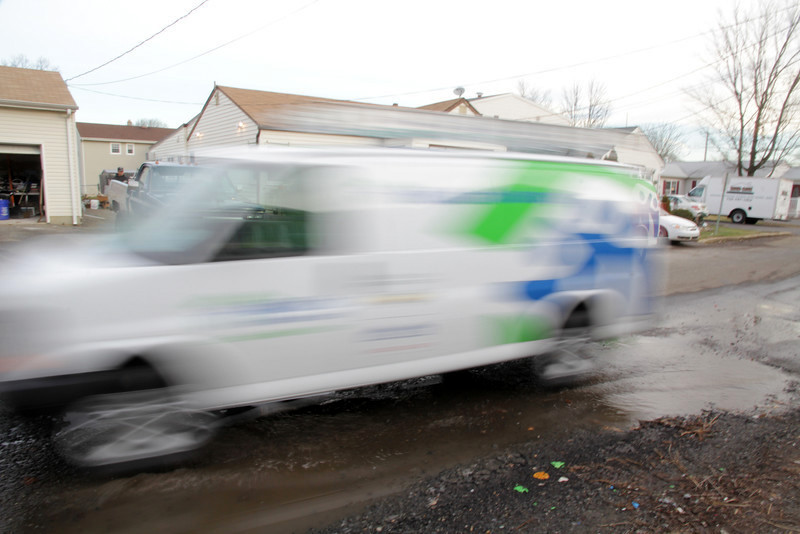 Above: A Habitat for Humanity Mobile Response van makes its way past the Rodriguez family home and on to another home being repaired by Habitat for Humanity volunteers. The Habitat Mobile Response Units brought much needed building supplies to the area to help rebuild homes in Union Beach, New Jersey and Staten Island, New York in the months after Hurricane Sandy made landfall.

About Habitat for Humanity

It's important to know that Habitat for Humanity is not a give-away program. No homes or home restoring is done without the sweat-equity and participation of the homeowner. Habitat offers affordable payment plans that allow homeowners to build homes at a cost that cannot be rivaled by the traditional banking system.

To learn more about how Habitat works and to see if you may qualify for a Habitat home or home restoring program, visit Habitat for Humanity's website.

To make a donation that will further Habitat's work is easy. Visit Habitat's donation page to see how you can help give a family a hand up.