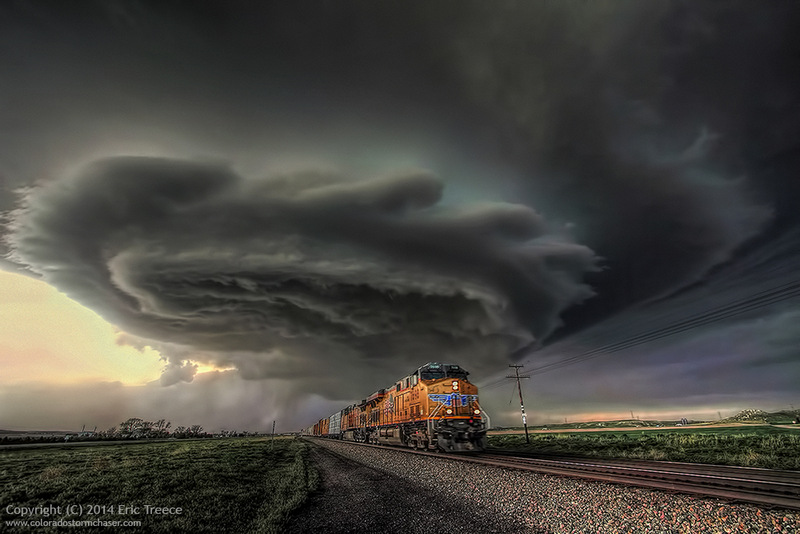 So some people think storm chasers are a little crazy.  Why would you want to chase something that could be so destructive?   Well, I have always had a fascination with tornadoes and severe weather and when I moved to Colorado in 1999 I decided I had to give this chasing thing a shot.

I started in May of 2000 and was hooked from the first chase.  I didn't see a tornado, but the beauty of the plains had captured my heart.  Fast forward to May 19, 2014.  I have taken some pretty incredible images since I started and truly feel I get better every year I go out.

My chase partner and I had been chasing a Low Precipitation Supercell storm for a couple hours as it tracked South East toward the city of Sidney, NE.  The Union Pacific Railway has numerous lines that run across the state and we happened to be running along one of those lines that runs East/West along Highway 30.

As we started to approach Sidney we stopped to set up a time lapse camera along the tracks and video tape the storm as it made its way East.  As we stood there and watched its approach I thought to myself,  "It would really be cool if an eastbound train came along to get some shots of it with the storm."

There was a 3 unit engine group about 2 or 3 miles west of us doing some kind of work switching tracks or something.   I watched and hoped that they would come our way and I could at least get the locomotives with the storm. But then in the distance a full length train came around the bend.  So I grabbed my Canon 7D and started to take some test shots.   I prefer to shoot at as low an ISO as I possibly can.

The dilemma I was faced with was having to come up with a solution to shooting in a dark environment and balance out the ISO/F Stop and shutter speed settings to try and balance out the shot to make me happy.  I was committed to a 200 ISO as, in my opinion, anything higher makes things a little too grainy for my liking.

Next decision was, do I want to follow the train and blur the storm or hold fast on the storm and have a somewhat blurred train?  I decided I wanted the storm to be as sharp as I could keep it and decided to shoot the storm and let the train show motion and drama.  I set up my camera and patiently waited for what seemed like an eternity as the storm kept getting closer and closer.

Finally, when the moment came I raised the camera and let the shutter rip. After I looked at the images on the LCD screen I didn't think much about it. In all honesty I wasn't that impressed.  Later that night I hastily threw something together with some minor editing in Photoshop and Topaz to get it online on my Facebook and Twitter accounts.  When I woke up in the morning I was astonished how many shares and retweets it had received. Out of all the photos I have taken storm chasing, it was probably the most shared, viewed and retweeted photo I had ever taken. 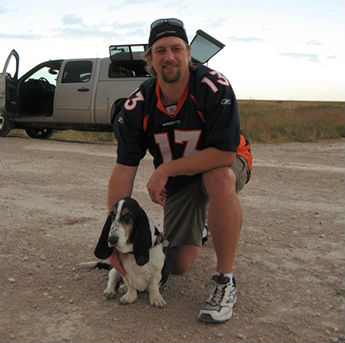 Eric Treece is a professional storm chaser and videographer with over ten years of experience capturing extreme weather.  Eric's photography and videos have been featured on numerous national  news braodcasts, including; the Weather Channel, CNN, Fox News, and more.  Much of Eric's weather expertise comes from his experience as a Great Lakes Ship Master, at the helm of the S.S. Wilfred Sykes, where weather is just as unpredictable on the water as it is on the plains.