How to Shoot Low Light Photos 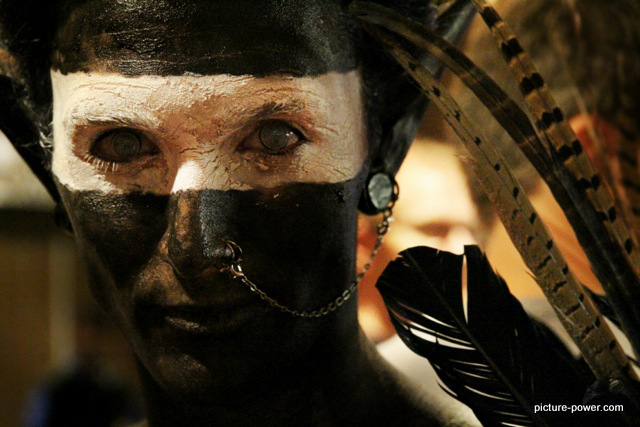 Shooting low light photos can pose interesting challenges to the new photographer.  Here are some creative photography techniques to get the most out of the least in a low-light situation.

For successful low light photography you need to understand how to choose the best exposure that will create the kind of photograph you wish to make.

Your exposure is controlled by the ISO, aperture and shutter speed settings you choose.

I shoot with a Canon 60D. I like this camera. If you are so inclined you can read my review of the Canon 60D and the other items in my gear list.

You will see from the data in the pictures below that I pushed the 60D to its ISO limits. And this is, I think, the single greatest thing you can do to help your low light photography.

In fact for this series of pictures from Dragon Con 2012, the noise created by using such a high ISO gave me some interesting options when I edited the pictures. I won't pretend to understand the dynamics of pixels but these high ISO pictures seemed to accept edits very well.

All of these low light photos were edited online with Picmonkey. Edits were pretty basic and did not involve layering. 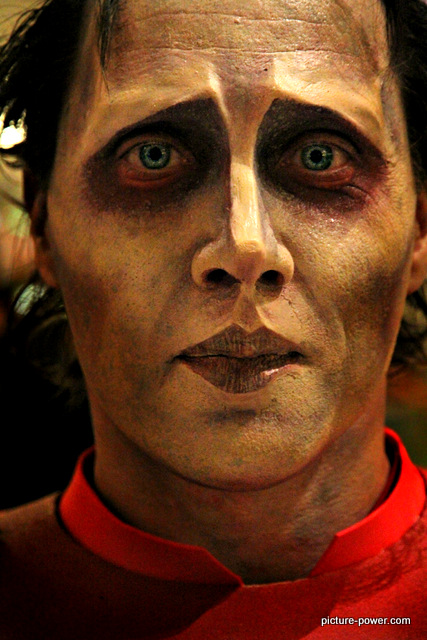 Above: This is one of my favorites from Dragon Con 2012. His make up was well done and I was lucky that there was a lot of natural light around; even if it was very low light.

Like so many characters at Dragon Con, when I asked if I could take his picture he was very cool with it. I actually  think some people were offended when I didn't ask them for a picture. 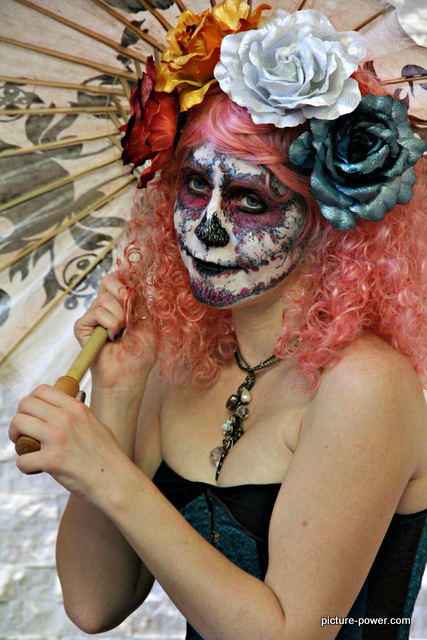 Above: This is another favorite from Dragon Con. Another photographer had set up lights in the lobby of another host hotel. I'm not sure if he was charging for photos or simply taking advantage of the fact that Dragon Con offers a great opportunity to take some very cool portraits of people who, for the most part, want you to take their picture.

Anyway, the other photographer had this model posed and sitting under lights. So, I walked up behind and snapped a handful of pictures. Then as I walked away I had a moral question dog me all the way to the elevator. Did I just steal another photographer's picture? Had I committed a photo-felony? Am I a terrible person?

Upon the opening of the elevator an Ewok walked out and I took his picture too. Then, as the doors closed I answered my questions with this: all is fair in public spaces. And then the door closed on my moral ambiguity.

This lens is a general purpose lens and not what most would call a portrait lens. For these photos I would have loved to had a Canon 85mm f/1.8 EF USM or a Canon 70-200mm f/2.8L IS USM lens. These lenses provide very wide aperture settings (low f/stop numbers) and this means that literally 2 tons more light can come through the lens when set to its widest setting.

But you can't wish for a lens when you are taking pictures. You work with what you have and the matter of the fact is that the Canon 15-85mm f/3.5-5.6 IS USM lens is able to do just about everything and it does it pretty well. 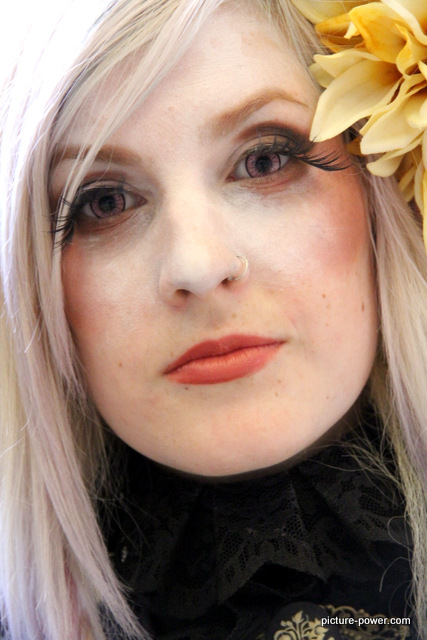 Above:  I really don't recall the situation surrounding this picture. I recall the girl, but I don't recall the moment behind the lens. Whatever. When I saw the picture on my computer I liked it and was glad to see it and I wanted it to be on this page. 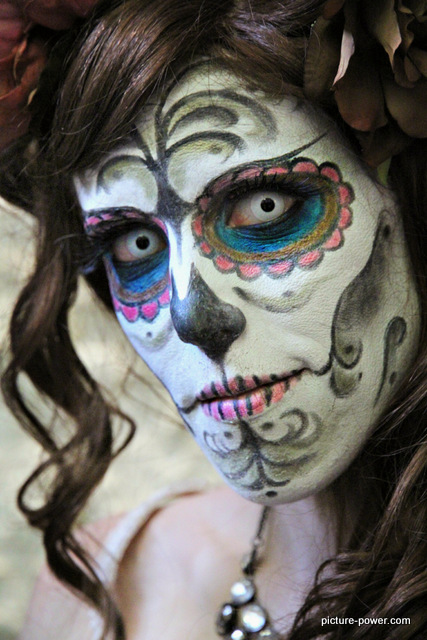 Above: This is another picture I took as someone else was taking a model's picture. After having already given myself permission to take pictures that other people were staging, I ran amok and started stealing anybody's shot that I could frame.

This one came out well because it was in the big lobby with lots of natural light. Even though it was low light the light was evenly diffused by the time it made it to the lobby floor. This diffused light cast nice even shadows and highlights across the faces of the models.

You can see in the picture below that the light was not as diffused and as a result the picture has more contrast. 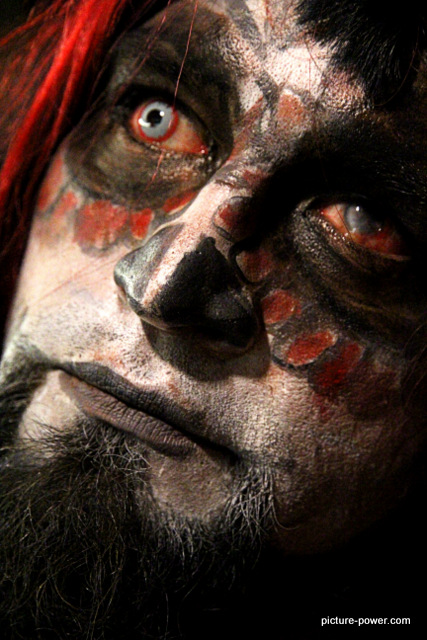 Above: In this picture I was in the basement of the hotel. You can see the kind of people they keep in the basement - this guy is evil and very ugly compared to the women upstairs.

Since I was in the basement I lost every bit of natural, well-diffused light. So many of my pictures were coming out underexposed in the bowels of the hotel. Since I don't care for using a flash I came up with a way to come out of the basement with some cool pictures.

In order to get this picture I asked the guy if he would walk over to a series of track lights mounted on the ceiling. The light was shining directly down and when he lifted his face toward the light I was able to get enough light on his face to get the picture.

When you find yourself in a low light photo situation, look for light. It's that easy. Don't have something? Find it. Then exploit it to your advantage. 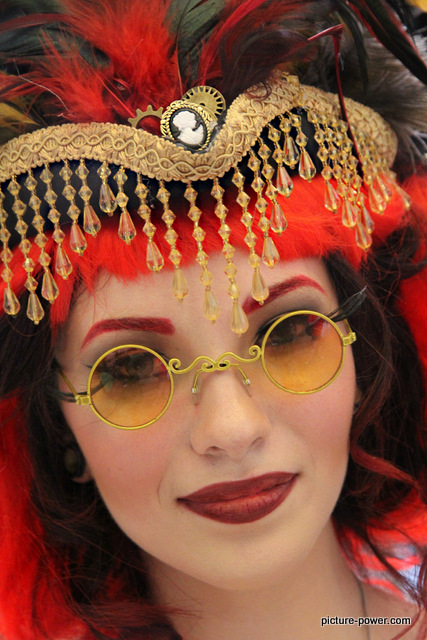 Above: Another great picture from the open air lobby of one of the host hotels for Dragon Con 2012.

One thing that challenged me at Dragon Con was the fact that while many people had on great costumes and makeup, I was having a hard time making the picture look like something other than a picture of a guy in a cyclopes outfit in the lobby of the hotel.

I wanted the pictures to show a place where the characters these people created could live without interference from the outside world.

I was able to do this by taking close ups of faces ensuring that nothing "normal" looking appeared in the frame. For this picture I stood on a chair to force the perspective downward, toward the floor where there was less "normal" looking stuff.

If I had taken the picture head on you would have seen a bell-hop and a taxi behind her and that would have killed the mood of the picture. 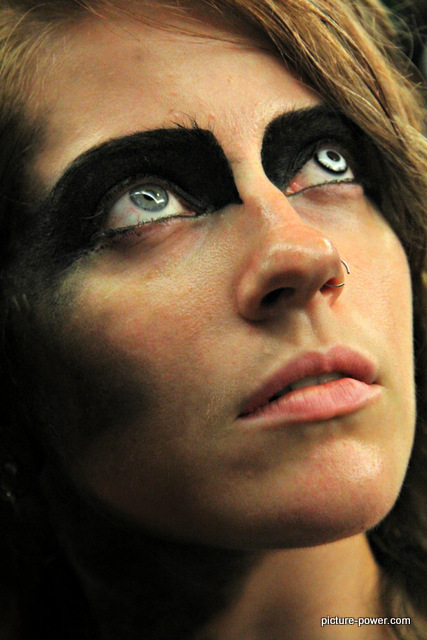 Above: Having seen success with the "why don't you look up at the light" approach I was able to get another nice portrait.  Because the light was coming down directly on her head casting strong shadows down on her face made her look odd. The shadows that were being cast from the overhead light only added to the ugliness that would have been had I taken a picture without her looking into the light.

By having her look up I was able to put light on her face and make a picture where otherwise there was not a picture.

Find your light then exploit it to your advantage when shooting low light photos. 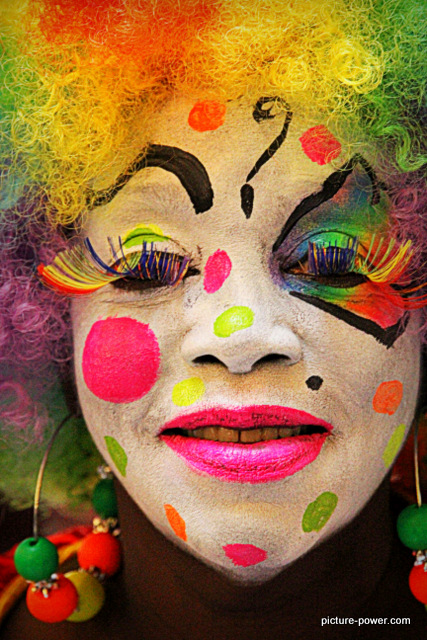 Above: This clown was actually working at the hotel selling fruit juices or something. She had a great fro and a great smile and with a couple of quick snaps I had captured another low light portrait at Dragon Con.

I edited this picture in Picmonkey. I edited all of my Dragon Con pictures you see on this page with Picmonkey. If you are looking for an easy, intuitive editing program, this one works great. It does not offer near the flexibility of Photoshop or Lightroom, but truth is, I don't need 80% of what those things offer anyway. 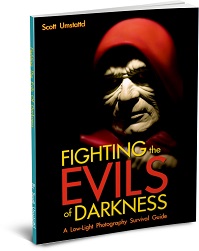 So those are a few tips for capturing low light photos.   I hope you enjoyed this little lesson.  If so, let me know on my feedback page or send me an e-mail.

Also, if you want to learn more about how to shoot in low light, make sure to download my free e-book "Fighting The Evils of Darkness: A Low Light Photography Survival Guide".   Click here to join the Superpower Photo Club and receive your free e-book.