My Most Powerful Picture: My most powerful picture has less to do with me as a photographer and more to do with the subject matter. In a sense, all I did was point the camera and press the shutter. I will give myself credit for at least seeing the potential of the photograph. But it is the subject and the story behind the image that makes this my most powerful picture. 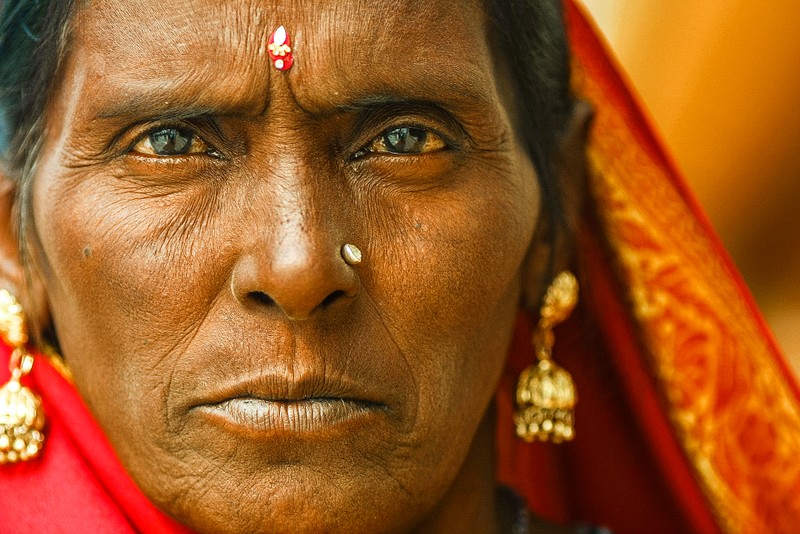 This picture was taken in 2006 in front of the Taj Mahal in India. It was my first trip to India and I knew I wanted to capture faces. Faces deep with emotion and hardship. Faces that showed the rigors of a life and lifestyle that I knew nothing about. But I worried. I was concerned that people may react aggressively toward me if I took their picture.

Having never been to India, I wasn't sure if people would think I was stealing their souls by taking their pictures. It sounds naive now as I write this, but as I prepared for the trip that was a genuine concern.

I had recently purchased the Canon EF 200mm f/2.8L USM lens and knew that it would be a great tool for taking portraits without needlessly getting in people's faces. If needed, I could get pictures with this lens without people even knowing I had "stolen their soul".  But that thought also gave me hesitation. Just because they didn't know I had taken their picture didn't make it right. Did it?

These were my concerns. Naive. Ignorant. Irrational. Real.

This picture is powerful to me, not just because of the tremendous stare and incredible lines of this woman. What makes this picture powerful and special to me is that I saw a part of her personality that you will never see.

As I took her picture (from the safe 200mm distance), she was gathered with her friends. Smiling, chatting and being very normal in every sense. We made eye contact after this picture and I walked toward her and her friends to show her the picture I had taken.

I was using the original Canon DSLR, the Canon D30 with its little LCD screen on the back. But it was big enough for me to show her the picture I had taken.

I was worried that if I had stolen her soul I would be hexed in some way in this life or my next life for having done so.

I was completely off base. Her face lit up and a huge smile emerged. Her friends bent their necks to see the tiny picture on the LCD screen. It was obvious there was no soul stealing going on here.

With their permission granted, I backed up and took a series of pictures of all of her friends. Their faces, wrinkled from sun and age, fell perfectly on the camera's sensor. After a few shots, I would walk back to the women to let them see what I had done. Then I would back up and take some more shots. Then back to them so they could see themselves again.

Someone on the trip told me that many of the poorer people in India don't have mirrors in their home. Meaning that, for the most part, these people went through life never really seeing themselves. The vanity of Western culture was lost on them. I don't know if that is true. But I like that story. And judging by the reaction of the women upon seeing themselves, one could think that it had been years since they gazed eyes upon themselves.

I left India pleased that I hadn't stolen any souls and that there would be no hexes placed upon me. And very pleased to have captured what I feel to be my most powerful picture.

Scott Umstattd is the creator and editor of Picture Power.